Due to the rapid depletion of raw material resources in the world and its use in many branches of industry, importance of boron is increasing day by day. Turkey, which has the highest boron reserves in the world is followed by Russia, South America and the United States.

Approximately 4.2 million tons (2 million tons based on B2O3) of boron were produced in 2016 in the world. In world B2O3 based boron production, Eti Maden (Turkey) ranks first with a 50% share, USA with 25% and other countries with 25% percent are trailing Turkey. 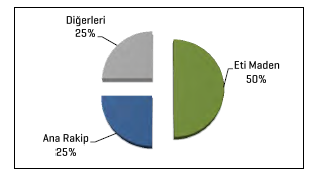